Bust out your sapiosexual self and get lucky this Saint Patty’s Day.

While once thought of as “uncool” to be considered a nerd or a geek, today, many people of above-average intelligence are embracing their techy, academic and out-of-the-box creative sides and putting their sexy-smartness out there. With role models, such as Bill Gates, Steve Jobs and Mark Zuckerberg—whose technical and creative genius literally shaped the current landscapes of social interaction, public, and personal communication and the influx of technology—letting the inner geek and nerd shine is becoming cooler and cooler every day.

As a self-proclaimed nerd who really enjoys working with clients who also identify as such, I’m often cruising the web looking for topics relevant to the nerd and geek communities and culture. I recently came across the term “sapiosexual,” which is used fairly commonly now in the dating world, but was new to me given that I’ve been happily married for years. While my first thought was that this might be some trendy, new and possibly kinky type of sexuality, I quickly learned that the term sapiosexual is being used on dating and social media sites by people who identify themselves as intelligent or wise. And, on dating sites particularly, people are listing themselves as sapiosexuals, indicating to potential partners that they find the content of a person’s mind to be the most attractive attribute—more so than physical characteristics.

The term sapiosexual, which is now mainstream on dating apps, such as OkCupid and Sapio, is putting a new twist on dating and takes a very different approach to partnership than the hook-ups and looks status quo. If you prefer brains over beauty and feel uninspired by the Tinder-type hook-up culture, you’re likely a sapiosexual. And, maybe you’re a single sapiosexual who would love to connect with a partner on a deep, intellectual and passionate level, but have struggled to find that sexy-smart someone.

As a relationship coach who works with many professionally successful clients with imaginative and strategic minds, I understand that it can be lonely at the top. It might be difficult and frustrating to communicate with people outside of your work, especially if you use industry-specific language and/or complex processes. You might think that you’re perceived as socially awkward, although you are emotionally intelligent and really want to connect. This perception may have kept you behind closed doors, unwilling to let your mind shine, feeling lonely and unlucky in love.

With Saint Patrick’s Day around the corner and spring approaching rapidly, maybe it’s time to spring forward with Daylight Savings and take some thoughtful action that could land you lucky in love. And, with more and more self-proclaimed sapiosexuals coming out of labs and libraries, the dating pool for those who prefer brains to beauty is ever increasing. But, where and how to find these brainy babes?

If you’ve yet to embark on the cyberspace journey of dating, it might be time to put your profile out there. Rather than hoping to meet someone who shares similar interests and intellect at a bar or the gym, most dating sites use personality testing and matching schemes, which can better connect you with compatible potential partners. They also give you an opportunity to connect with others via chat before meeting in person—avoiding much risk, investment or time commitment. And, since the rise in social media and dating sites in the 2000s, the amount of couples who have met online has skyrocketed. Today, more people coupling up through online dating sites than meeting at work, in restaurants or bars and/or through mutual friends.

You can try out more traditional sites, such as OkCupid and Match, however, with the influx of sapiosexuals on the dating scene, “dating apps with depth,” such as Sapio, are increasing in popularity. More and more people are looking for a partner who may be good looking, but more importantly, is intellectually inspiring.

Play To Your Interests

What are you most passionate about? Do you geek out on bikes, craft beer, coffee? Maybe you love to run, hike or cycle. Or perhaps you’re passionate about science, food, wine or art. People are often attracted to others who share at least some of their interests, so why not join a club or a meetup group? There are meetup groups all over the country with the goal of connecting people with similar interests. Whether it’s vegan cooking, backcountry skiing or hiking 14ers that ignite your passion, there are groups for almost everything you can think of. Many local museums, libraries, breweries and nonprofit organizations host social hours, which are also a great way to meet promising potential partners as geeky and nerdy as you.

With spring approaching, bringing with it longer days and warmer weather, it’s a great time to comb off the cobwebs of winter and get into the great outdoors. Outdoor patios, parks, hiking and bike trails, university campuses and even the local library lawn can be places of opportunity to connect with someone new. And, as the sun shines brighter and more often, many people feel increasingly happy, open and inspired to talk to someone new.

The term wingman (today, wingmate) originated to describe a pilot who supports another in a potentially dangerous flying environment. Much like flying in combat, trying to navigate the dating scene solo can feel threatening and risky. Like a pilot needs a wingmate and Batman relies on Robin, we can all benefit from having an ally. If the idea of going to a coffee shop, meetup group or museum on your own feels daunting, bring a friend—perhaps another single friend—with you and whether the dating waters together.

You’re unlikely to meet and connect with someone new if you stay inside your comfort zone. If you see someone who you find interesting and/or attractive, say something. It’s simple as starting with a hello and offering up something fun or interesting that you noticed about him or her. With the ice broken, offer your name and ask him or her. And if there is a spark of chemistry and the other person seems interested, take more action. Ask for a phone number and invite him or her out for coffee. This tactic might seem overly simple or it could come across as scary, but, in the end, what do you really have to lose? 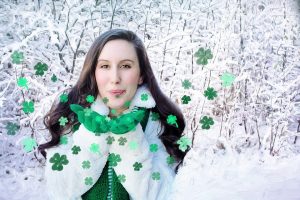 Once you’ve met someone you really like, embrace your inner superhero and let your mind shine. It’s okay to be open and vulnerable—people really like that. If you feel nervous, ask yourself what your inner superhero would do and go do that. Channel the luck of the Irish and get yourself out there this weekend. Whether it’s through finally putting together a profile and joining a sapiosexual dating site or grabbing your wingmate and hitting a Saint Patrick’s Day party, show up as your full, fabulous, nerdy/geeky self!

As a relationship and empowerment coach, I’d love to hear if and how you put the aforementioned tips into action. What worked? What didn’t? What other tips would you give to sapiosexual singles who are looking to get lucky in love?